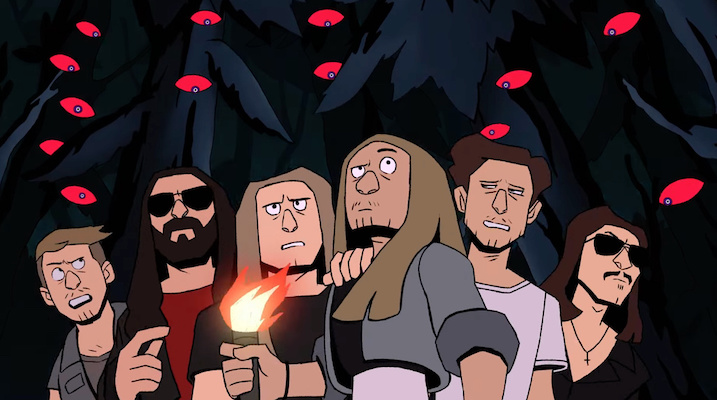 “We still remember that moment after we just finished recording our first album with our no-name band on an island with a total number of inhabitants of less than 375,000, not that far from the North pole and suddenly got hit with a record deal and started to hear that people were actually anticipating the record. It was a kind of a weird situation to be in. We were also joking about how fun it would be to create an animated video for one of our songs and laughed at the idea cause we only know a tiny fraction of the work that is involved in creating such a video, and it is a lot. That’s why we were even more surprised when RMIT University signalised their interest in making an animated video for our song ‚Creatures Of The Night‘ as they usually choose from a „highly classified“ list of bands that they work with. The whole process was very enjoyable and it was very fun to watch how the sketches slowly turned into form. We would like to thank RMIT University, Simon Norton, his students and all those who helped make this video become reality. It blew all our expectations out of the water and we think it could not have turned out better. We hope you enjoy it as much as we do.“

Moonlight, the silver in stars

Reveal the light within yourself

Throughout the lands of the old

Fear grips you all into its realm

And on that bright starlit night

When the stillness of empty streets echo the candlelight

Right when the moon shining bright

The inner evil of

Rise and become the deadly

Creatures of the night

Break down and bend the silver stars

Blasphemous monsters of the night

Distant howling of moonlight  brings evil to your eyes

Nowhere to run or to hide

Yet the memory lingers on

The inner evil of

Rise and become the deadly

Creatures of the night