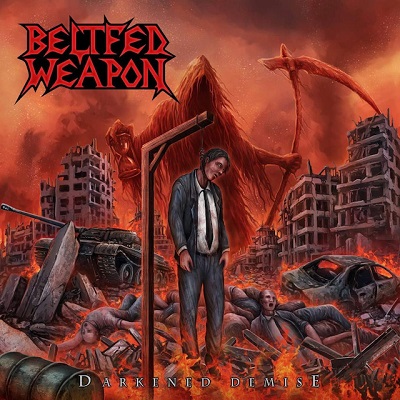 „‚Head First Into Hell‘ emerged from a side project idea with my friend Dagna Silesia who plays bass. She wrote half the riffs and I added my ideas and structured it out. The side project didn’t happen, but I felt this song, ‚Head First Into Hell‘ was very good and wanted to add it to the upcoming EP. I then reached out to Tim Aymar, as I really love his vocals, and asked him if he would be interested in doing vocals and he was on board, and Kragen and Bryan were on board as well. It is a honor to have all involved, not only on this song but the whole EP!“

Kragen Lum: „Frank Hetzel has put together an incredible lineup of musicians for the Beltfed Weapon EP Darkened Demise. When I heard the killer music and saw the list of talent involved in the project it was a no brainer for me to participate. Who wouldn’t want to do trade-off solos with Jeff Loomis on a couple of songs, right?! Metal fans should definitely check this out when it’s available!“

Jeff Loomis: „I first met Frank Hetzel in the early 2000’s through some mutual friends. I learned he was a Nevermore fan and also a guitarist, so we hit it off right away. I consider Frank to be one of my closest friends and someone I can always trust and count on. He’s a great dude and I’m very happy to have played some solos on his new EP. The longer solo in accept your insanity was something I obviously spent a lot of time on as it needed some kind of storyline to it. I quickly found myself working away at it on a cold rainy day in Seattle, which is always the most perfect vibe and time to write anything dark in our ever changing weather conditions. I think the final takes turned out killer and adds a cool flow to the song. Frank has come a long way with his writing and I’m super proud of him with all his efforts and great work ethic. For fans of Thrash and just good metal in general, I highly recommend giving this a spin. In the words of the late Chuck Schuldiner, “Keep the metal flowing” Frank, and I’m proud to call you a friend.“